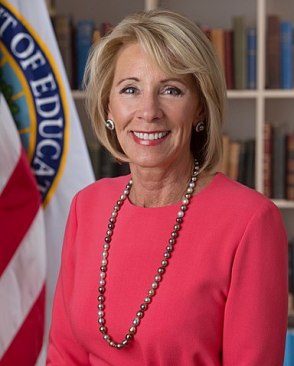 US Secretary of Education Elisabeth DeVos is NOT anti-public schools, she’s anti-FAILING schools, and so am I, and you should be too.

Regarding the nomination and confirmation of Secretary DeVos, during the past nine months I’ve read numerous quotes from incensed teachers, parents and students from across the country, including a huge dose of negativity from right here in Michigan.  Some of the strongest objections have come out of Flint, Detroit, Pontiac and Saginaw.  They all pretty much spit the same generalized talking point: that she is going to “destroy” Public Schools.  Quite frankly, the hard data would seem to indicate that in many places, the politicians, public school leaders and advocates have already done a fine job of destroying public education all by themselves.

Challenge 1:  To the anti-DeVos public education “advocates,” I challenge you to stop Secretary DeVos dead in her tracks by impressing her with your school’s success record.

The Michigan Department of Education maintains a database that displays each public school’s 2015-16 statewide percentile ranking based on measures of student achievement and student improvement.  Each school district is assigned a number on the scale of 0-99, with 99 being the highest relative performance and 0 being the lowest.  For the cities mentioned above, the numbers are sobering:

By the way, these numbers have been relatively consistent for more than a decade, and in some cases two or three decades.  And please spare me any claim that the MDE database has clearly been hacked by the Russians.  Or the NSA, or Republicans, or the 1%, or a Nigerian prince.

We’ve heard them ad nauseam: “She didn’t graduate from a public university!!”  “She clearly supports charter schools!!”  “She was never a teacher, she’s not even a degreed educator!!”

If these traits are so objectionable, then why was there NO similar outcry about the Secretaries chosen by each of the most recent Democrat Presidents?

That being said, what’s especially interesting is the one talking point we’re not hearing, which also happens to be the only consistent aspect of all of the opposition to Betsy DeVos; nobody is claiming “Our public schools are doing a GREAT job!!”

It’s All About the Money, Or Is It?

The Organization for Economic Cooperation and Development involves (and studies) the world’s most developed countries for the purpose of stimulating economic progress and world trade.  The OECD has reported that US teachers are better paid (avg = $53k) than most of their counterparts elsewhere in the world (avg = $46k).  The average first year high school teacher in the US earns around $38k compared to OECD nations at $31k.

The US Department of Education, National Center for Education Statistics reports we spend about $12,300 per student, compared to the OECD average of $9,300.  The OECD reports that the US spends over 7% of its GDP on education, compared to an average of 6% in the other OECD countries.  So, we’re paying teachers more, spending more on the students, and spending a greater portion of what we have.  What exactly is all of that buying us?  The answer…, a lot less than one would hope.

The Programme for International Student Assessment (PISA) is a worldwide study that compares levels of scholastic performance in 72 developed nations.  In the 2015 PISA study, US students’ scores ranked them as follows:  Math – 39th, Science – 25th, Reading – 23rd.  Just how are US graduates going to fare in the global workplace when their critical skill levels aren’t even in the top 20?

Challenge 3:  Either admit that what’s been tried in many schools isn’t working, or roll out the data that shows it is.

I don’t know (and quite frankly, neither does anyone else) whether Secretary DeVos will be great for American schoolchildren (and their parents) or not.  But I do know two things:  First, that continuation of current practice or maintaining status quo in failing schools will NOT solve the problem, especially when many of the people directly involved refuse to even acknowledge – much less take responsibility for – the implications of the percentile rankings listed above.  Second, Secretary DeVos and her family have a long history of education advocacy and philanthropy, for both private and public schools, including those schools in and around her hometown:

It would seem that if anyone had a legitimate complaint about public schools being “destroyed,” it would be the folks from those schools listed immediately above.  Yet, I’ve seen no concomitant outcry of concern from the teachers and parents of these schools.

I can hear my detractors already: “Of course they’re not worried, they’re doing great, she’s not going to destroy them!”  And the problem with that is…?  Shouldn’t schools that are underperforming indeed be the focus of efforts to revamp the current model and rebuild from the ground up?

The real question for my hometown and our I-75 corridor neighbors north and south is, do you want public schools like those west of Grand Rapids, or not?  Because based upon many of the actions for the past 30 years, and especially the vehement objections since November 23rd, it sure seems like your answer is… not.

Challenge 4:  With all due respect, give Secretary DeVos a chance… you’ve had yours.