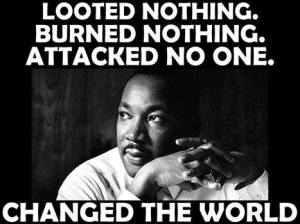 It took me many years to finally understand and appreciate Dr. Martin Luther King Jr. I was 6 yrs. old when he gave his famous “I Have a Dream” speech from the steps of the Lincoln Memorial. The following year he was awarded the Nobel Peace Prize. I was only 10 when he was killed in Memphis on April 4, 1968. During the ensuing years of junior high, high school and college we learned about him and his role in the struggle surrounding the American Civil Rights Movement.

Given the magnitude of his influence on our culture, it’s hard to believe he was only 39 when he died. However, along with his much-publicized efforts to guide America to a better place, there were also accounts of his (normal, typical) human flaws and failings. Initially, I chose to focus on the latter, not because I was white, but because I was lazy, and it was easier.

Dr. King challenged us, all of us, in ways that often made both his detractors and his supporters uncomfortable. He asked…, no, check that… he demanded that we look more closely at things that we either could not, or would not see, both in our culture, and in the mirror. This all seemed like it involved genuine dedication and even outright work, and at the time, I just couldn’t be bothered.

I had to grow up to appreciate him. I had to age, experience life, and thankfully along the way, learn. I had to mature, to even simply wise up in order to recognize the significance of this amazing man and his noble mission.

Growing up in Flint during the 60’s & 70’s, I experienced both the best, and the worst that Flint had to offer. However, many years later, after leaving Flint and living in too many places to count, there are aspects of that time in Flint about which I believe Dr. Martin Luther King Jr. would have been pleased. LONG before the word “diversity” was even a small part of our vernacular, we had cultural diversity and acceptance for each other as individuals, especially within our age group.

That state of being was NOT in deference to political correctness, because that phrase didn’t even exist. The robust, blended milieu was absolutely real, not this watered-down, homogenized, sensitivity-laden drivel that we see misguided do-gooders trying to create today. We had respect for each other, and we also held each other accountable. We did it because we lived it every single day, and we didn’t need some clueless, pretentious bureaucrat showing up to “empower” us with some sort of vacuous “program.”

I think Dr. King would have liked much of what he saw in Flint, and even more of what he saw in us. I believe that had he lived to further his mission, we would certainly have at the very least, a much more clear understanding of what racism is, and what it is not. I believe that he would agree that much of what is now labeled as racism is simply opportunism on the part of the racism accusers. Dr. King would be angered that his Dream has been hijacked by people who have forgotten that his Dream was for ALL people.

Were he here today, I believe he would be disgusted by our constant bickering, finger-pointing, and self-righteous indignation. He would be angered by our use of diversity as fuel for divisiveness. He would admonish us to spend considerably less time being offended, and much more time being effective. His niece, Dr. Alveda King (author of the book The Spirit of a Dream) recently said “I really believe he would ask us to communicate without fear, without hate, without rancor. I believe we can still do that in America. I really do.”

It took me a while to come to appreciate the man we now know as MLK, and I can only hope that more and more of America will eventually get there as well. Rest in peace Dr. King, may we one day be so very fortunate as to properly understand, embrace, and ultimately achieve your Dream.